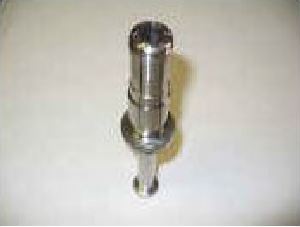 It must be understood that the pin and the collapsible core sleeves float in the mold base and will be positioned in center by the retaining diameter. (Stripper ring, slides, or in the case of a side action the cavity and core inserts) This requires that the pin expands the fingers of the core while being contained to avoid unnecessary wear on the shut off of the core.

The molded part is required to be held centered during ejection, as the collapsible core is collapsed. This is so as not to hang the part up on one side of the core. This could be accomplished through the use of a part detail or molding part of the outside diameter on the stripper ring, etc. On side actions, the part needs to be held in place (centered) as the core is removed from the molding area. The mold function will dictate the most advantageous design.

As with all mechanism with moving parts, venting must be away from the core. Preferably along the parting line, vent to the outside of the mold. In some cases, when the core is a side action, it may be necessary to vent along the outside diameter of the core. The fingers of the core have clearances of +0.0000/-0.0002”, this requires that the core remain clean of gassing and residue produced in the molding process.

The pin diameter has similar clearances to the inside diameter of the fingers of the core. As was stated earlier, the pin and the core are centered by these diameters fitting within the containment ring (stripper ring, side actions, etc.) You should never vent along the pin.

Cleanliness is essential to maintaining the endurance of the core. Mattering on the material being molded and the effectiveness of the venting, a schedule for cleaning the cores needs to be established. If the fingers become too dirty or gummed up with residue from the molding process, they will not close properly, which will cause damage to the core. It is better to clean the cores more often than to allow the dirt to build up to an unacceptable level. The mold design should incorporate an easy way for removing the cores for cleaning.

As with all injection molding, having the mold close on a part that did not eject properly will cause damage. When the part is molded and hardens, the part shrinks smaller than the cavity. This situation will cause breakage to the core, since it will not be able to open the fingers into the molded part. There are many safe guards which can be installed to avoid this situation.